The Little Church That Could

On a cool, overcast day in November 2021 in Kern County, California, several men and women experiencing homelessness camp out on the sidewalk in one of Bakersfield’s poorest neighborhoods. They watch suspiciously as Rossana and Jose Aguilar approach. Smiling broadly, Rossana greets each person and asks if they’d like some free food. Their haggard faces break into smiles at the sight of packaged cookies. 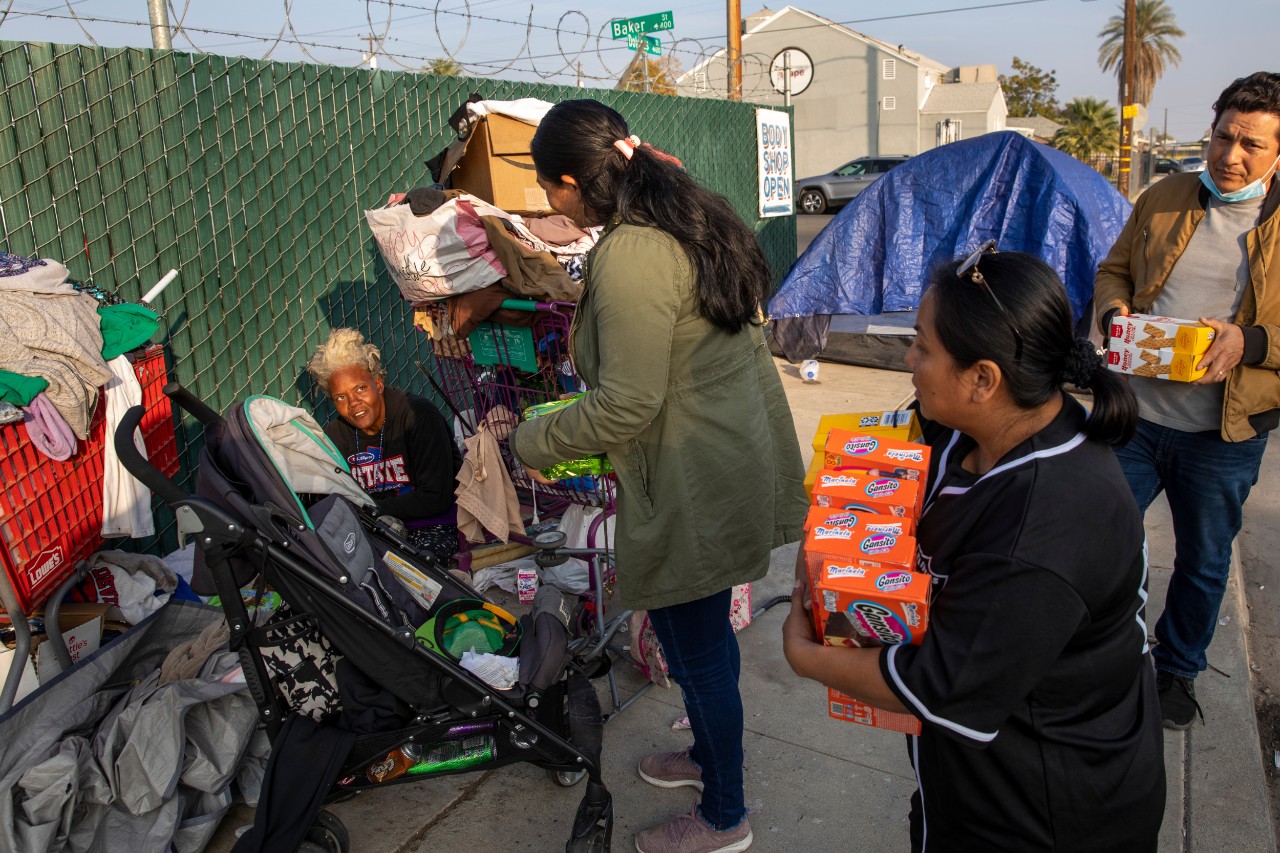 Rossana, Blanca and Jose offer a homeless woman cookies and invite her to the next day’s Boxes of Love® distribution and free lunch. Agape Church is visible in the background.

She asks in English, and Jose in Spanish, how they are and offers to pray for them. The men and women express their appreciation and ask questions about the church and the food giveaway the next day.

Centro Cristiano Agape, also known as Agape Church, distributes food twice a month. But this pre-Thanksgiving giveaway is special, because with help from the Inner City ministry of Cru®, they’re providing hundreds of people with a Box of Love®, each of which includes a holiday meal that can feed six. 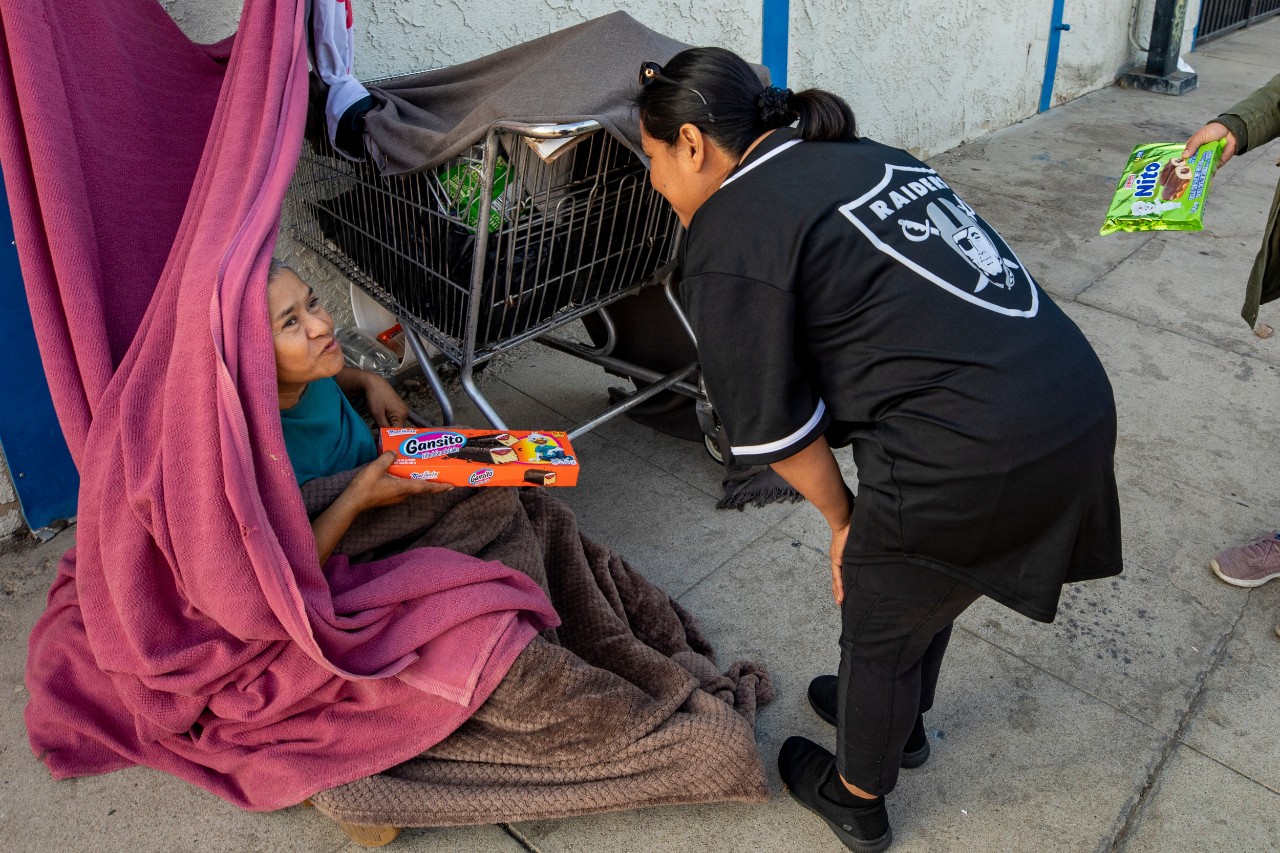 Blanca offers to pray for a woman. 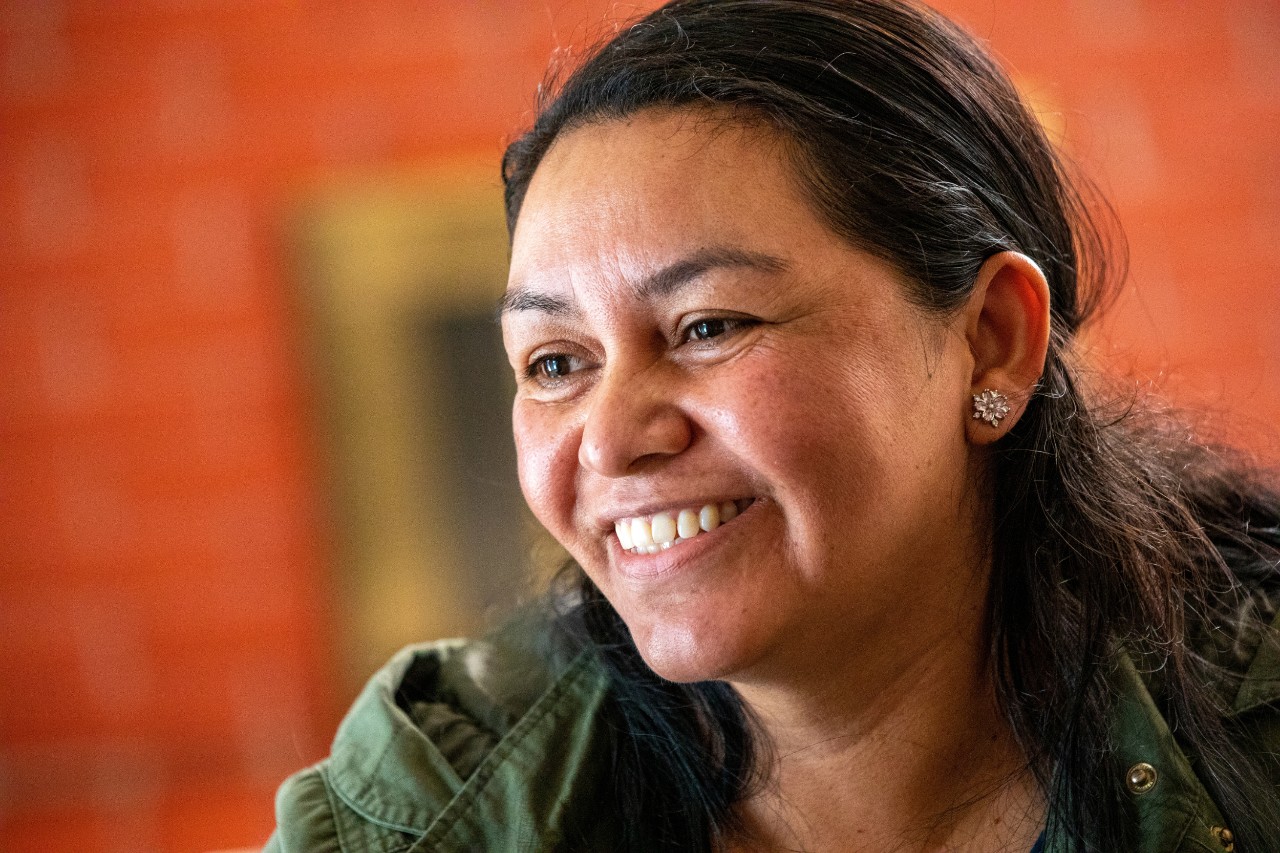 Rossana’s love for God and others touches everyone she meets.

Despite all the challenges in this community, God is working through volunteers like the Aguilars and through small congregations  like Agape Church (about 50 members) to care for peoples’ physical and spiritual needs.

Food insecurity amid "the world's breadbasket"

The number of Bakersfield’s homeless and low-income families has increased dramatically over the past few years. Many blue-collar families include three generations under one roof, including aunts, uncles and cousins. 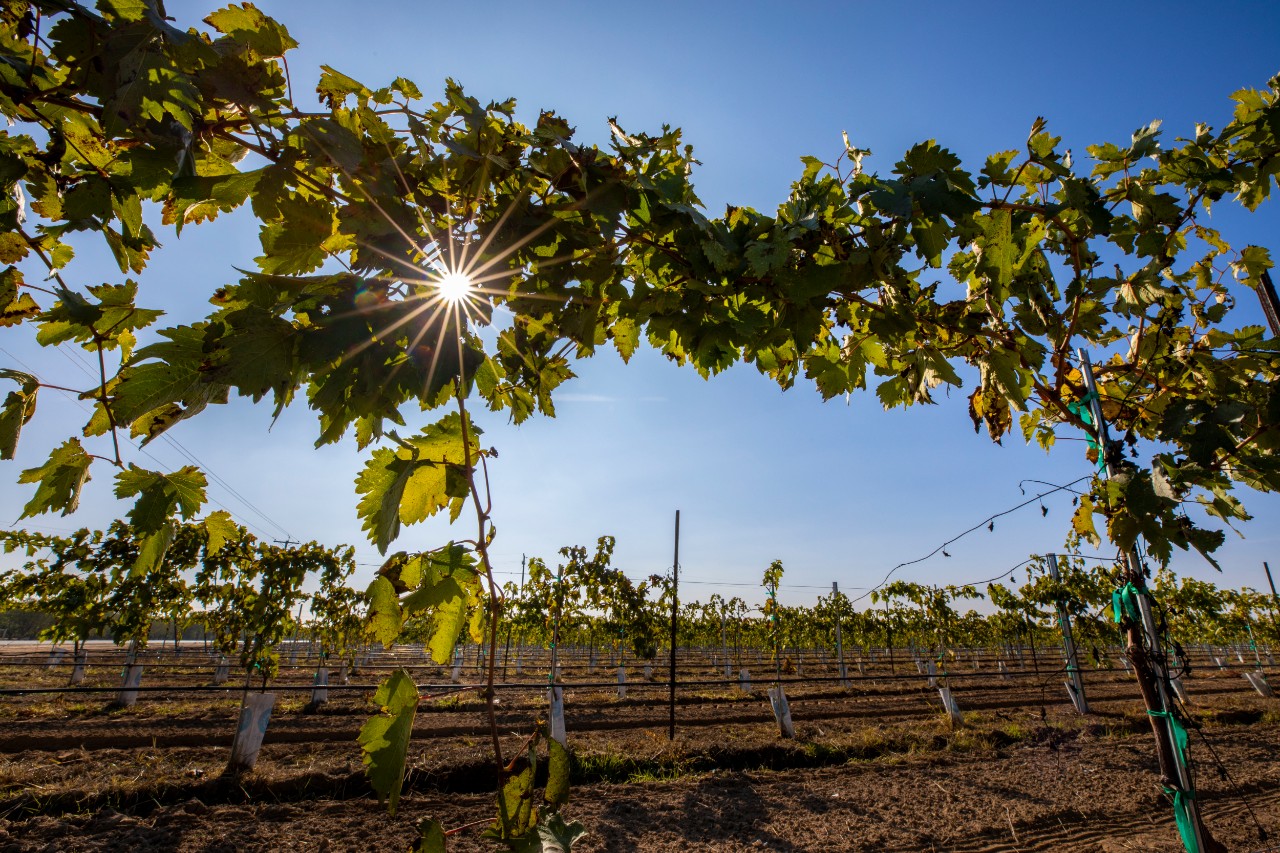 Before COVID-19 and the drought, Kern County was a top producer of California crops such as almonds, grapes, pistachios, carrots and citrus.

Historically, the Bakersfield area offered many jobs in the oil industry, according to Ken Frech, one of the Cru Inner City Bakersfield co-directors. But that’s changed. “They've automated the oil fields so much that job opportunity has just really dwindled,” he explains, “and then California wants to do away with all oil. As far as investments coming into Bakersfield, for oil, it's drying up."

According to MoneyGeek’s April 2020 unemployment data over 200,000 farm workers filed for unemployment because of the impact of COVID-19. And after farms reopened during June 2021, the state water authority eliminated surface water irrigation in August, which affected many.

“The drought has gotten so bad that many growers didn’t even plant a crop this year,” says Richard Garcia, Cru Inner City Bakersfield co-director. “For many of these families, programs like Agape Church’s are their only source of food.” 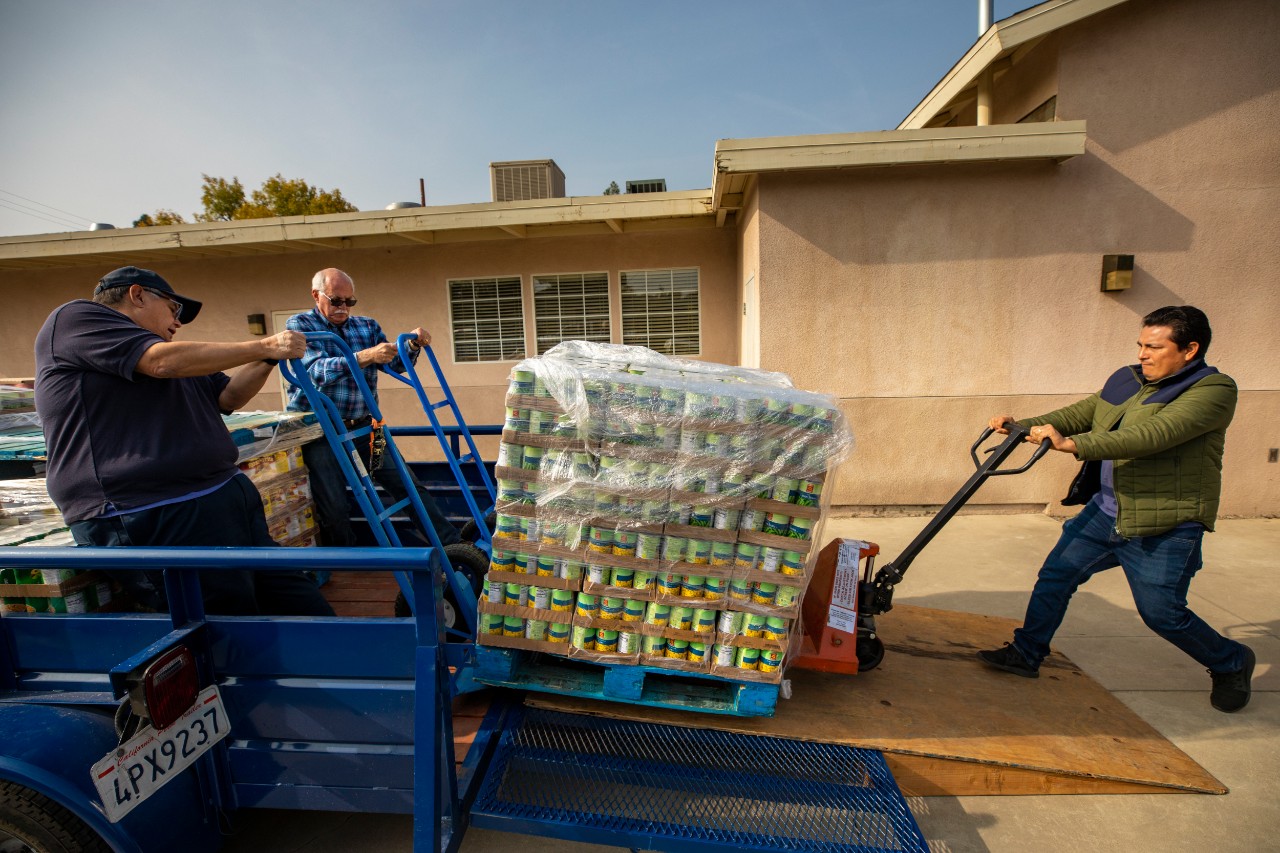 This was true for 73-year-old farm worker Jose Luis. Newly widowed, Jose had no food or family and didn’t know where to turn. In desperation, he posted a cry for help on a local “items for sale” Facebook page. 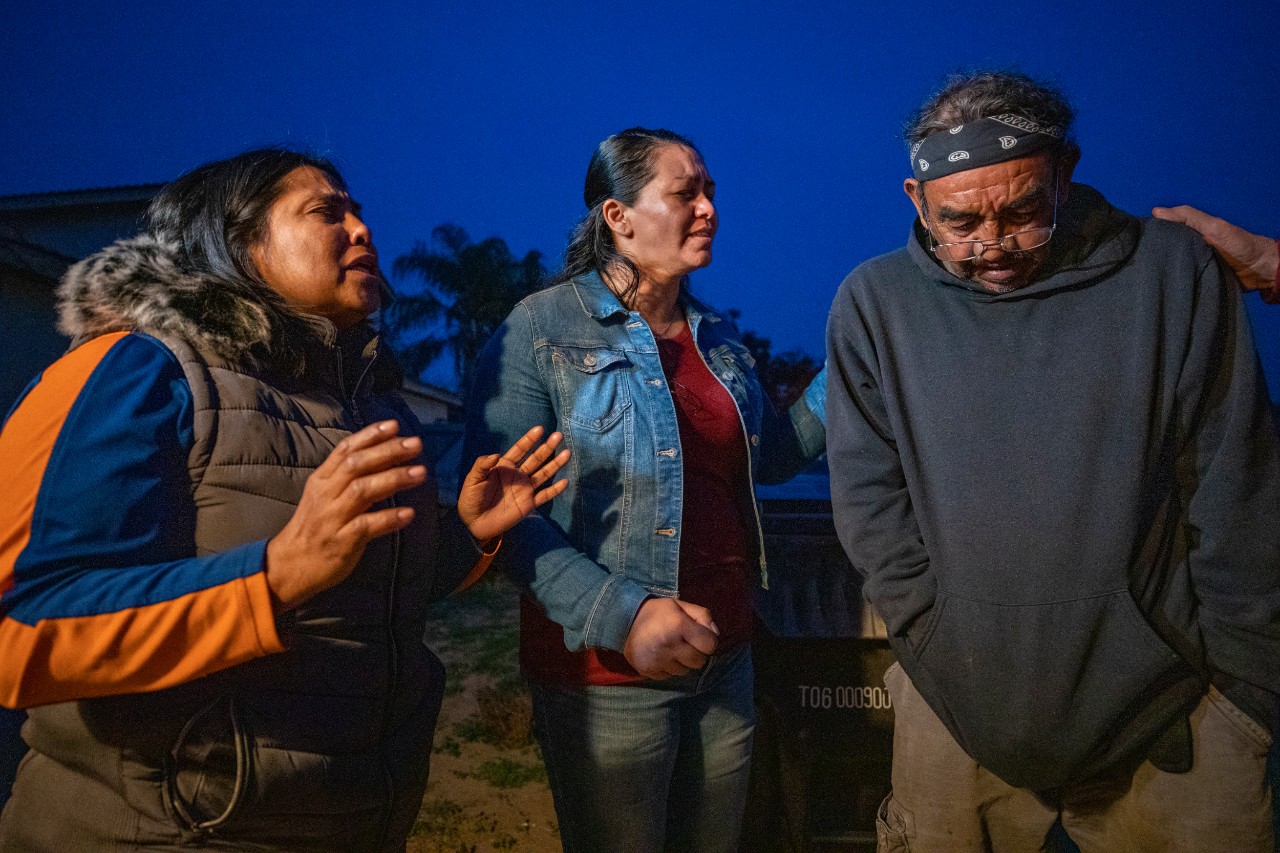 Blanca (left) and Rossana ask God to help 72-year-old farm worker Jose Luis fulfill his promise to his dying wife to take her ashes back to El Salvador for burial. 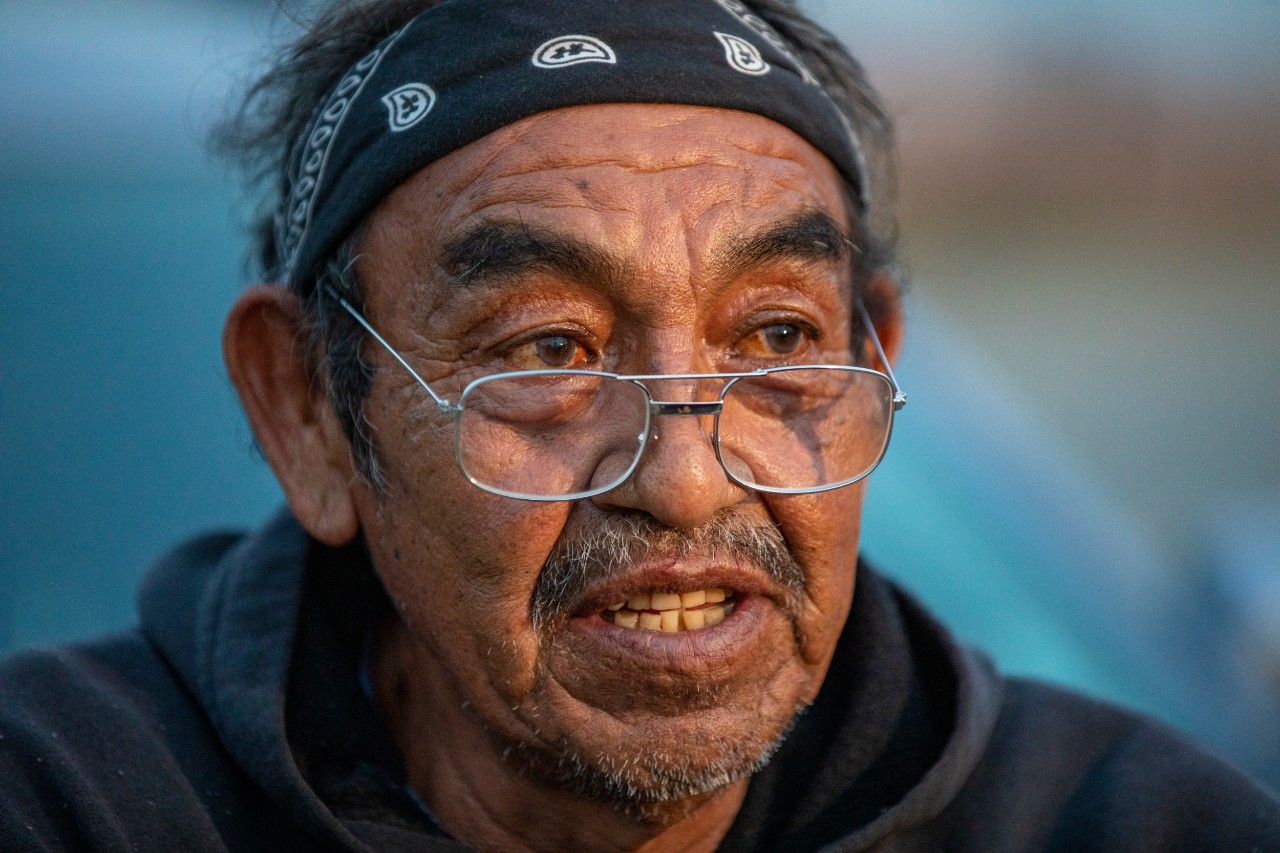 Jose is grateful to Agape Church for their food and friendship.

Blanca Hernandez, Rossana’s spunky, energetic neighbor and fellow food-pantry volunteer, saw Jose’s post. She immediately bought food and drove a half-hour to take it to him. After meeting Jose and hearing his story, she told him, “You are not alone. God loves you.”

After Blanca brought more food and Christian resources from Cru’s Inner City ministry, Jose told her, “I’m glad you’re here. I read all the material you gave me, and I want to know who Jesus is.” 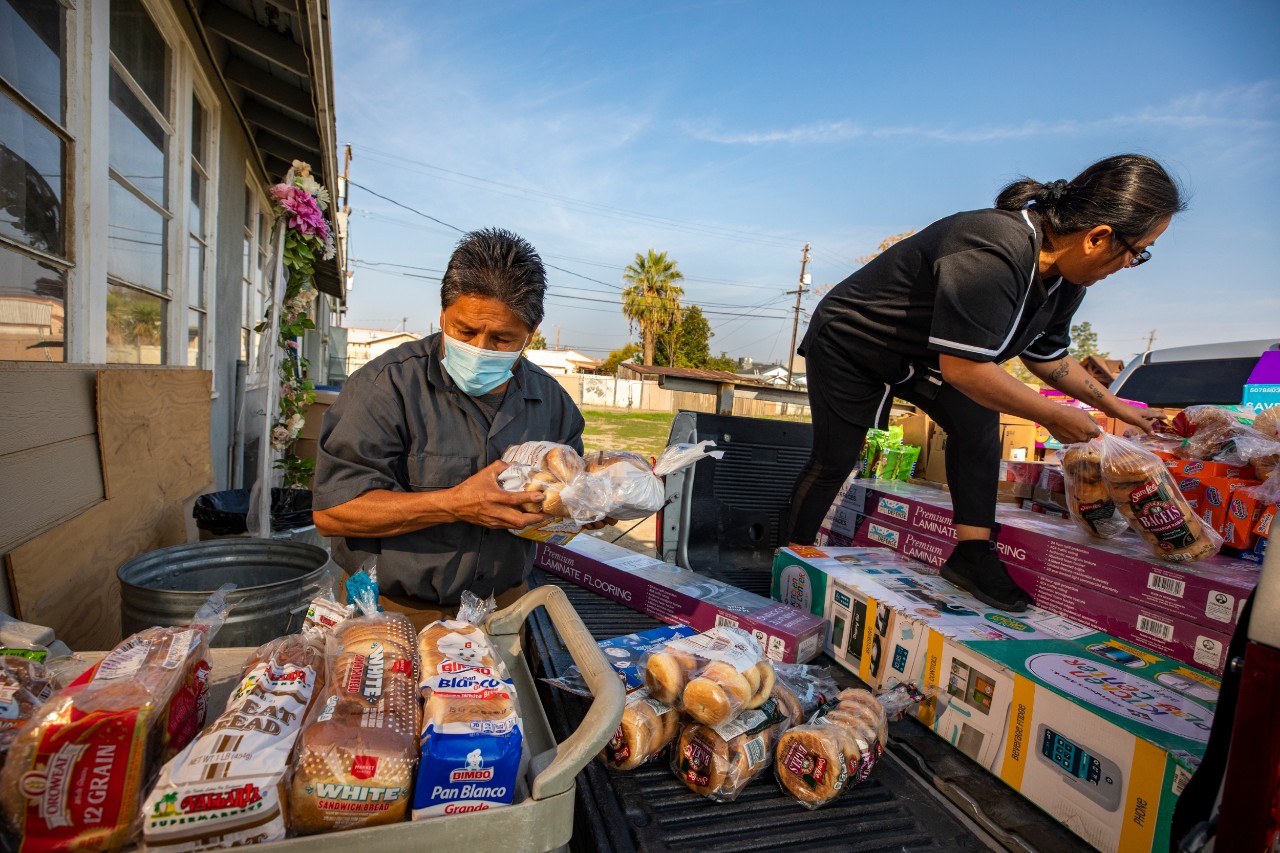 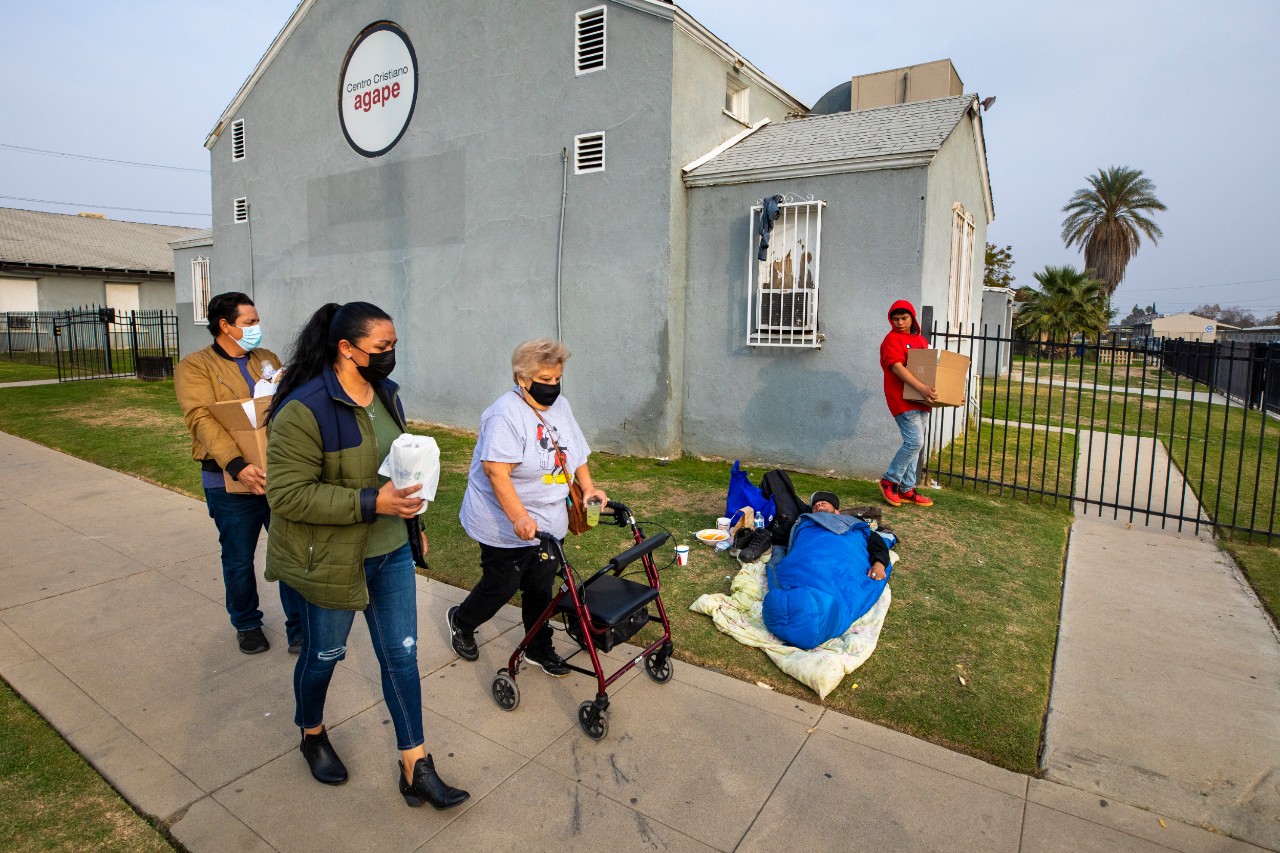 Jose and Rossana take a Box of Love® to a neighborhood resident’s car, walking past a homeless man who’d been given a bowl of soup earlier.

“I was so depressed, I wanted to commit suicide,” Jose says, “but now I know I’m not alone anymore. God cares for me and I’ve felt that through the church.”

Many others experience the love of God through Agape Church. At an Easter outreach, with Easter bags provided by Cru Inner City, more than 50 children heard a clear presentation of the gospel. A family of migrant farm workers from Oregon attended, and their little girls prayed and received Christ. Between frequent work trips to different harvests throughout the year, the father attends Jose’s men’s group at the church, and Rossana visits their mobile home 45 minutes away to bring food and encourage them spiritually.

A new faith, a new focus and a new relationship

Twenty-one years ago, helping people through a church was the last thing on Rossana’s mind. Born in Mexico, she and her parents moved to Bakersfield when she was 5, returning to Mexico when she was 13. When the family again moved to Bakersfield, Rossana was 17, pregnant and too far behind in the American educational system to graduate from high school.

After her daughter was born, Rossana’s younger brother, Manuel, began inviting her to church. While he served time in the county jail for driving under the influence, he’d come to faith in Christ through a volunteer from Agape Church. Although Rossana was negative and skeptical at first, she finally relented. Understanding for the first time that Jesus loved her enough to pay for her sins by dying on the cross, she put her faith in Christ.

Despite attending Agape Church regularly, Rossana didn’t get serious about her faith until two years later. Out with friends one night on the dance floor, Rossana heard in her mind What are you doing here? Instantly, she was no longer comfortable in that environment.

“I knew it was time to completely surrender to the Lord and just do what he’s asking me to do,” she remembers. “When I realized that God was my provider, that he loved me the most, I felt like a totally different person. I started doing everything I could to serve at the church.”

Increasingly burdened by the desperate poverty in the church’s neighborhood, Rossana began distributing food from Agape Church’s food pantry — stocked each month from Bakersfield’s nonprofit food bank. The church also partnered with Inner City ministry, which provided food, funds, training and materials to help the church reach the lost in its community while meeting tangible, physical needs.  “We’ve learned so much from Cru,” Rossana says. “They’ve really been a blessing to us.”

Rossana later met her future husband, Jose, while she was leading a Bible study hosted by a woman named Maria. Jose is Maria’s son. When Jose then relocated to Mexico, he and Rossana stayed in touch and began dating long distance.

One day, back in Bakersfield, Jose’s mother was in a terrible car accident with an oil company truck; she was paralyzed from the neck down. A large court-awarded insurance settlement provided for all Maria’s needs, including salaries for her children to serve as rotating, full-time caregivers. Jose returned to the United States not only to help care for his mother but also to marry Rossana. 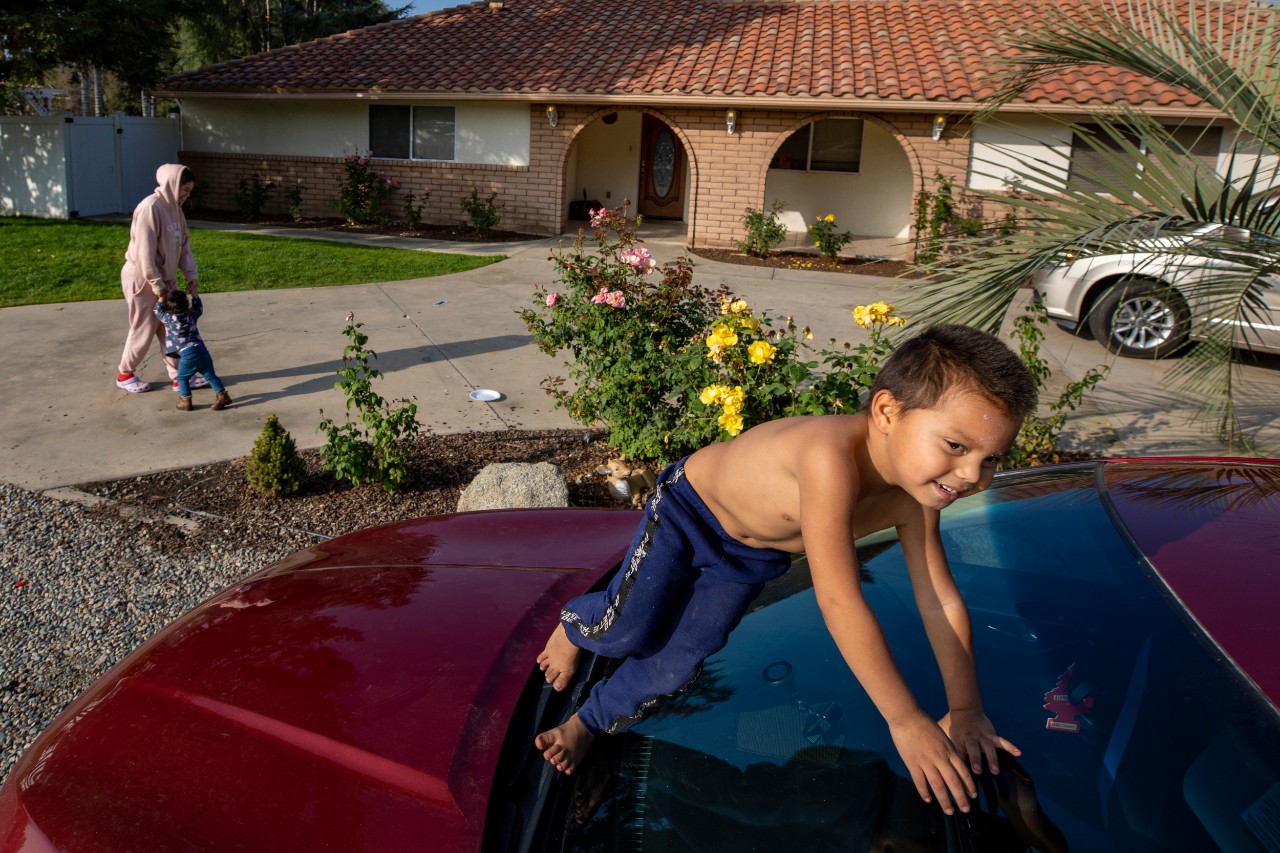 While Jose and Rossana care for his mother inside her house, their oldest daughter, Estefany (in pink), plays with her little sister and cousin. 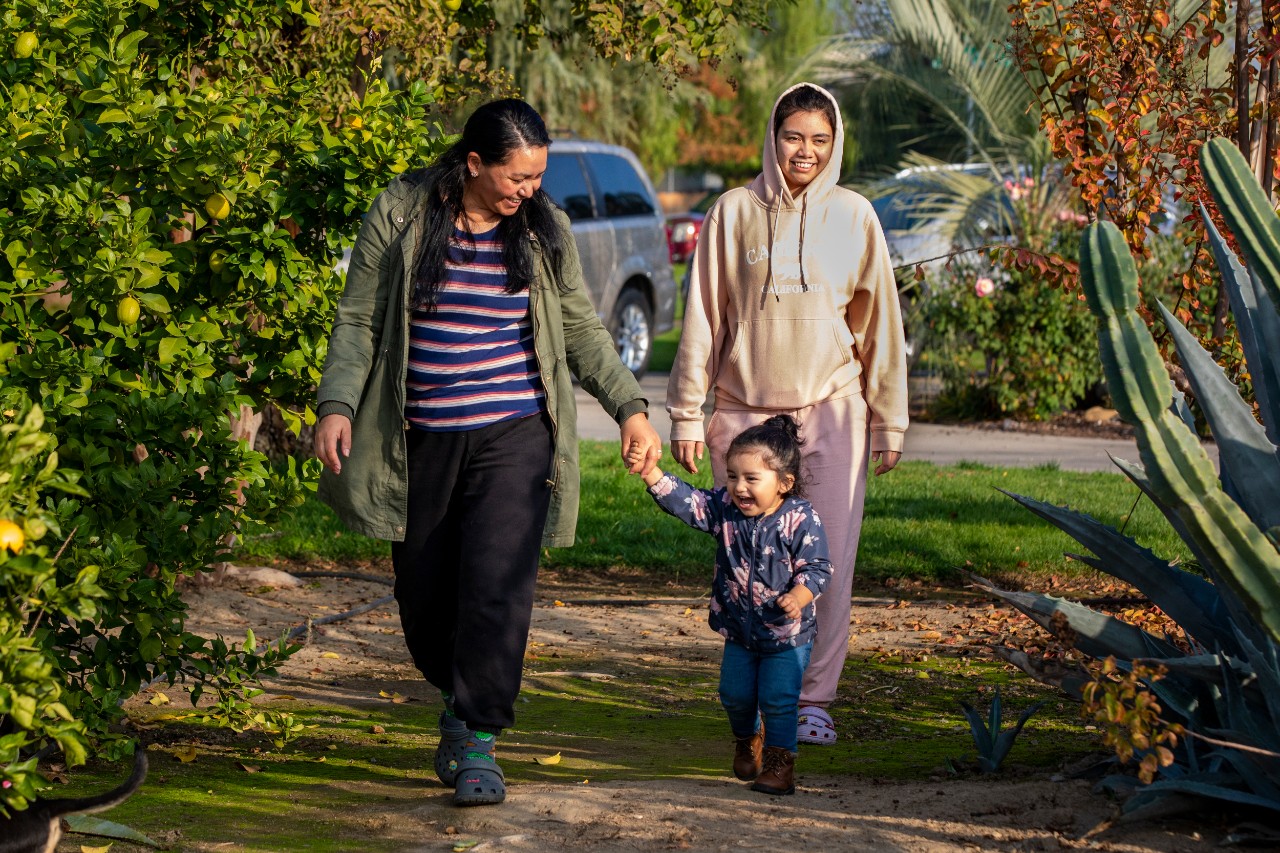 Rossana (left) takes a break from caring for her mother-in-law, Maria, to walk with her daughters Emma (1) and Estefany (18). 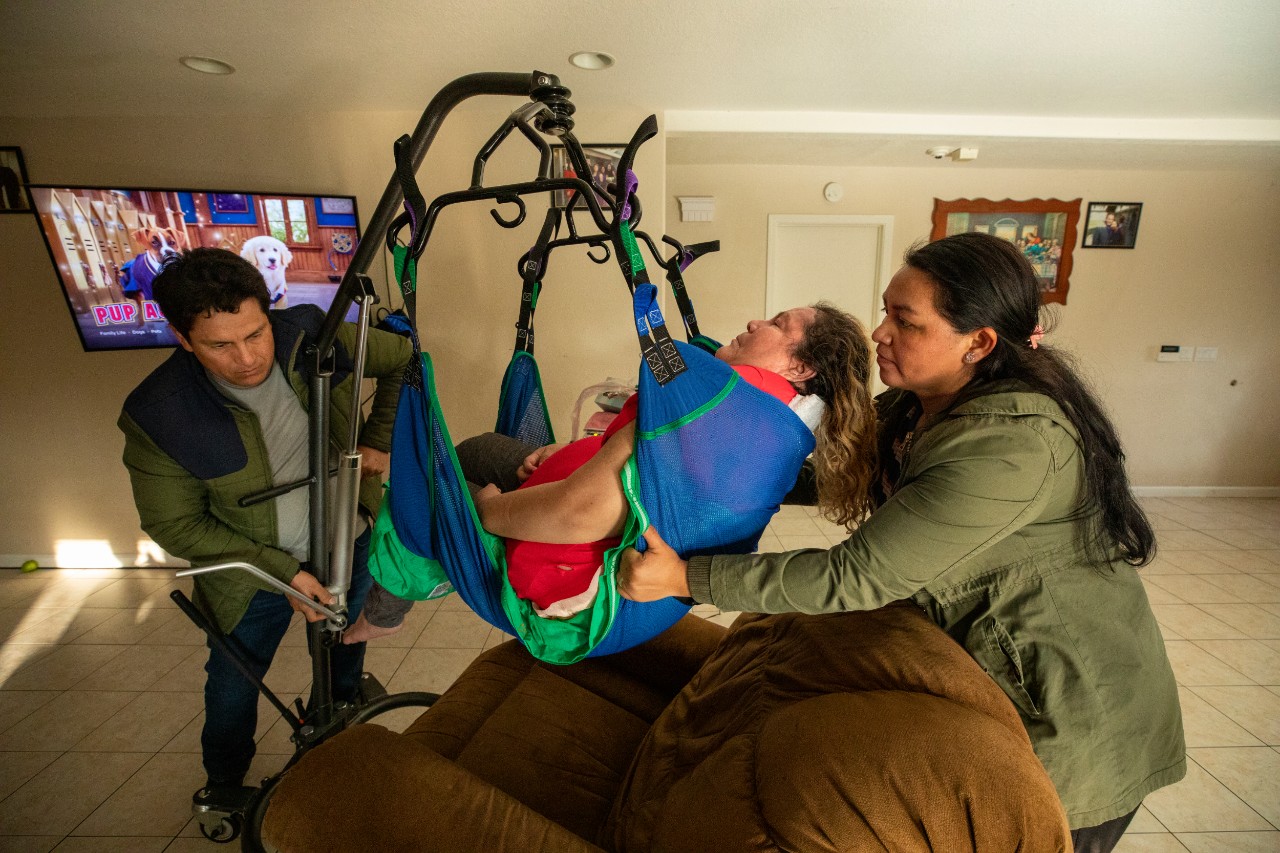 Jose and Rossana gently lower Maria, his mother, into her padded recliner in the family room.

Now, in addition to caring for Maria 12 hours a day, three days a week, Rossana and Jose own a small side business selling personal care products. Once a week, Rossana sells jewelry and accessories online. She also coordinates Agape Church’s food distribution. 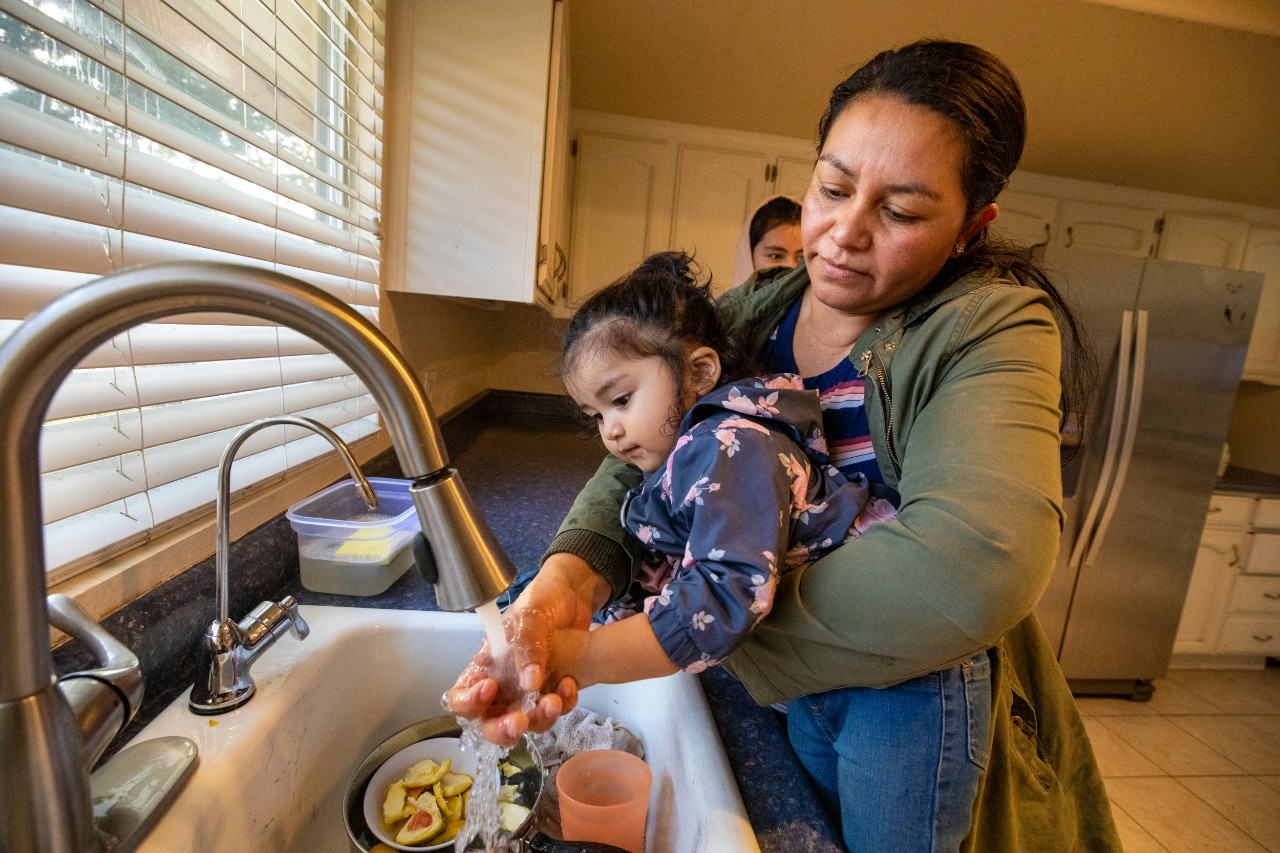 In Maria’s kitchen, Rossana helps Emma wash her hands after playing outside. 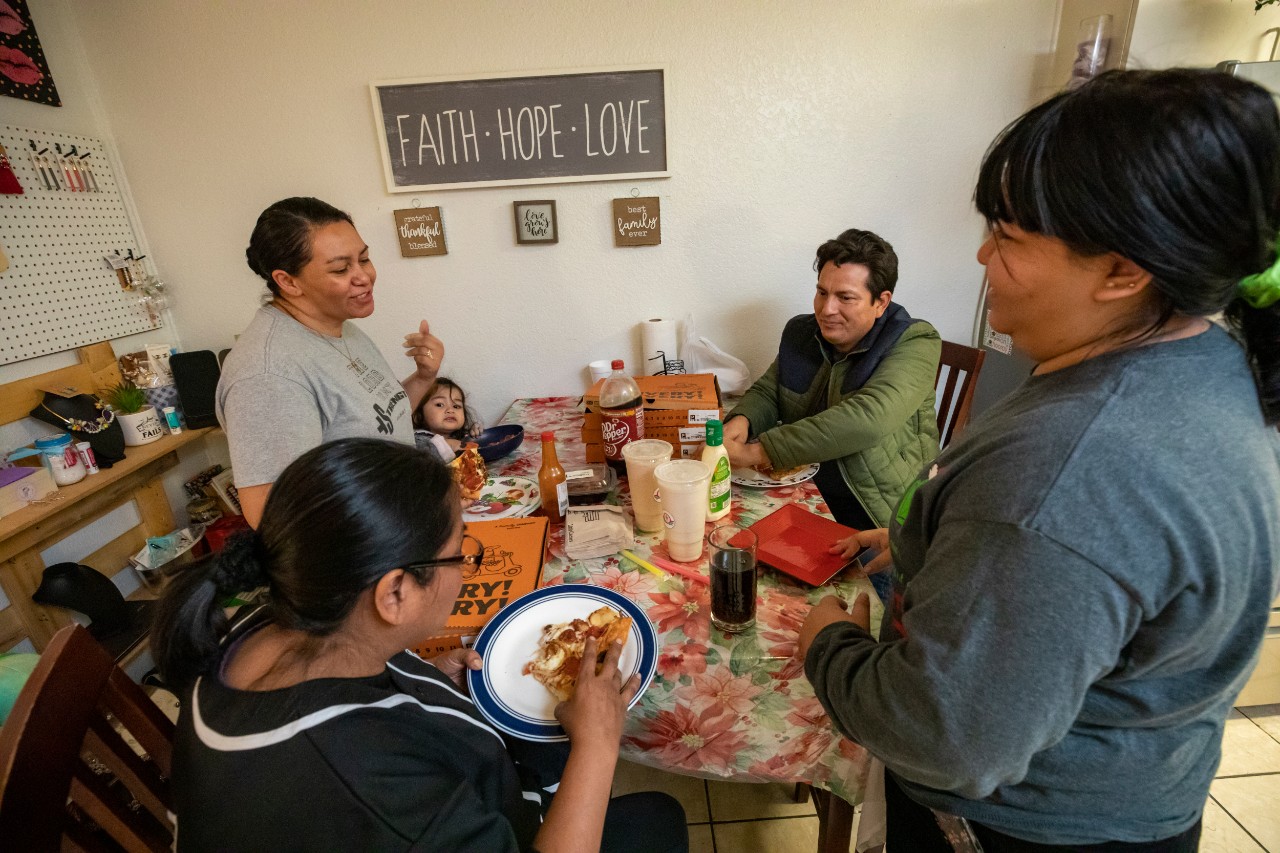 In their small apartment, the Aguilar family hosts Blanca (in black) for a dinner of Little Caesars pizza.

“It’s encouraged me a lot because we talk one-on-one with all the people who come to our church for food. It’s a lot of work, but I’m motivated to continue because you don’t have to go looking for people; they just come, and we get to share our faith with them. Because we’ve been doing this for seven years, people know to ask us to pray for them.”

When COVID-19 surfaced, the need for free food skyrocketed in Bakersfield, but donations to the church dried up. With those increasing needs, Rossana began a second monthly food distribution. 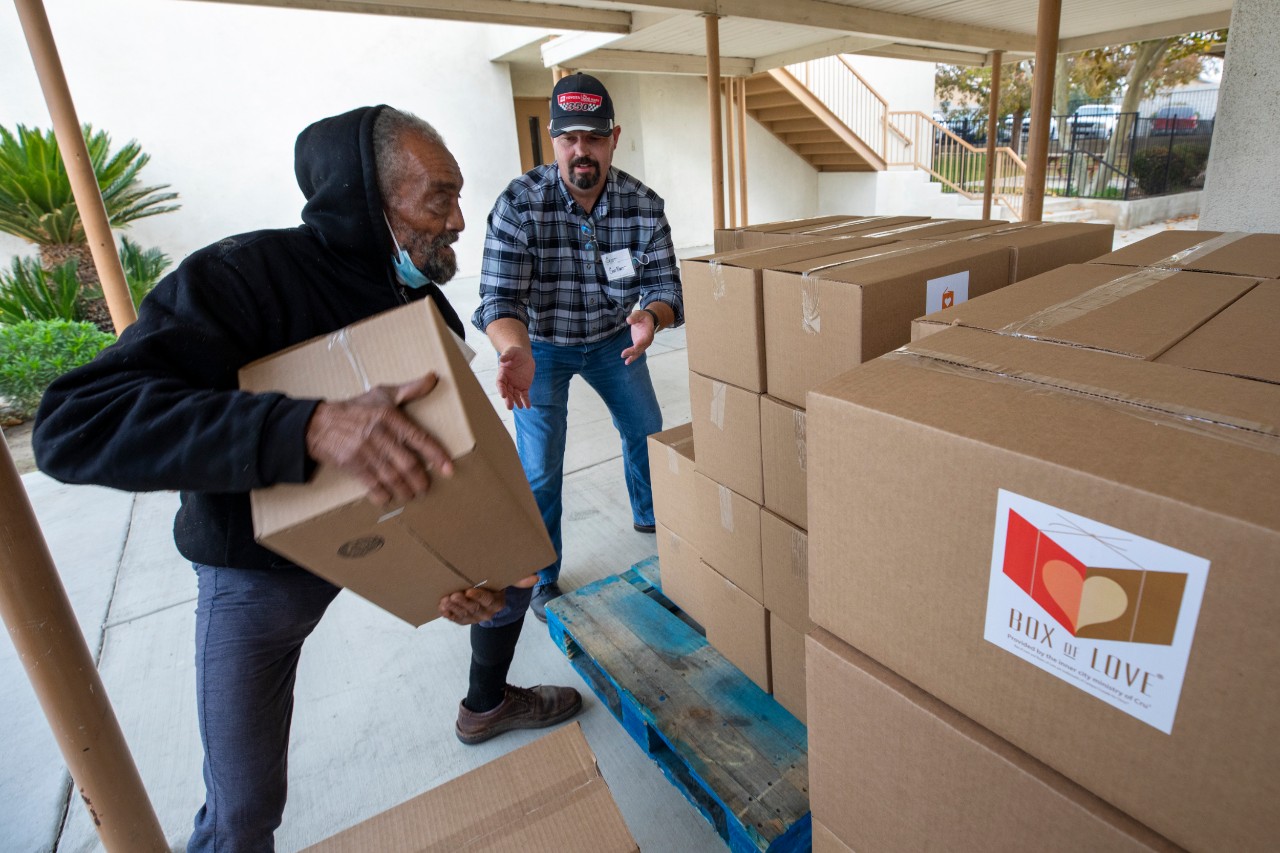 Volunteers from one of Cru® Inner City Bakersfield’s partner churches pick up Boxes of Love® for their food giveaway event. 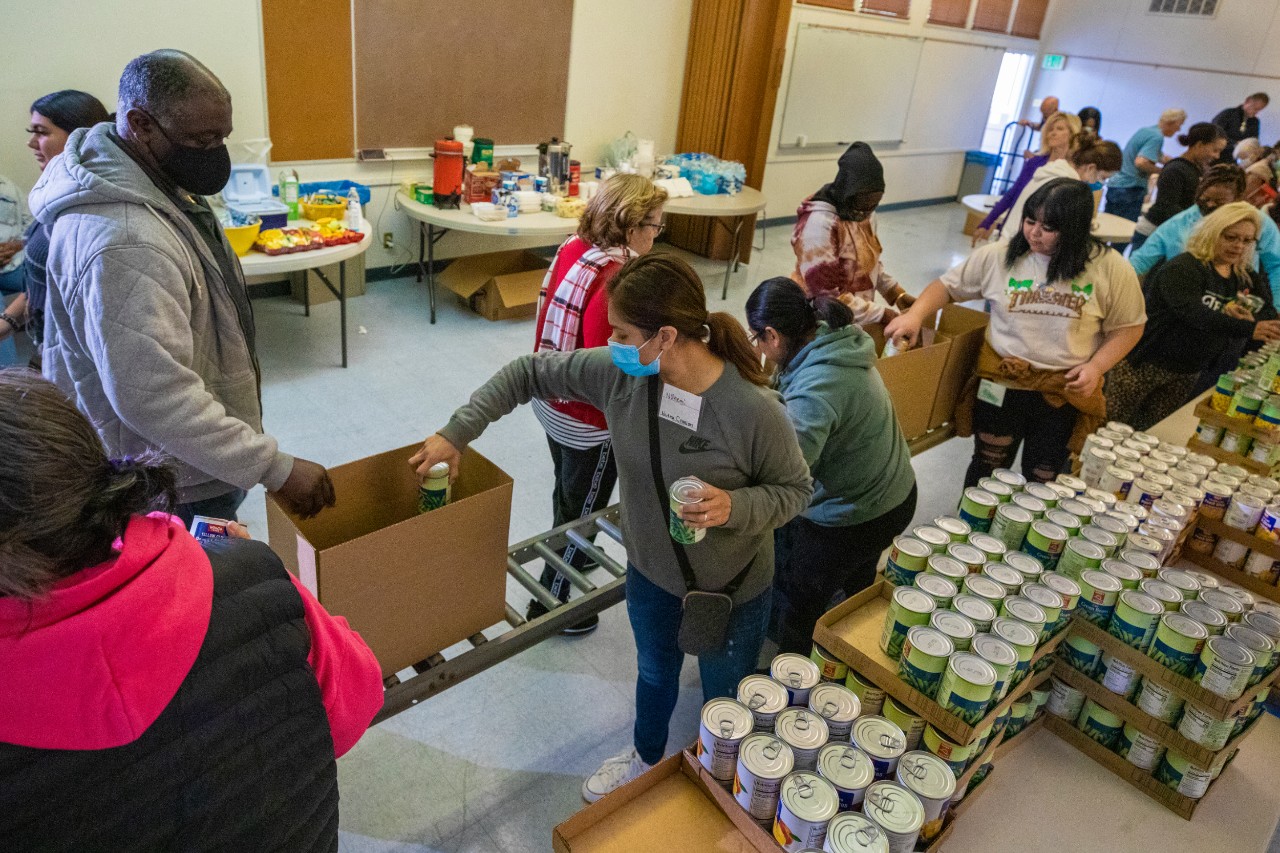 “We thought we were going to lose the building,” Rossana says. “We and the pastors bought and cooked ribs and sold plates of food to make the mortgage payments. Thankfully, we didn’t have to cut back on the food distribution.” 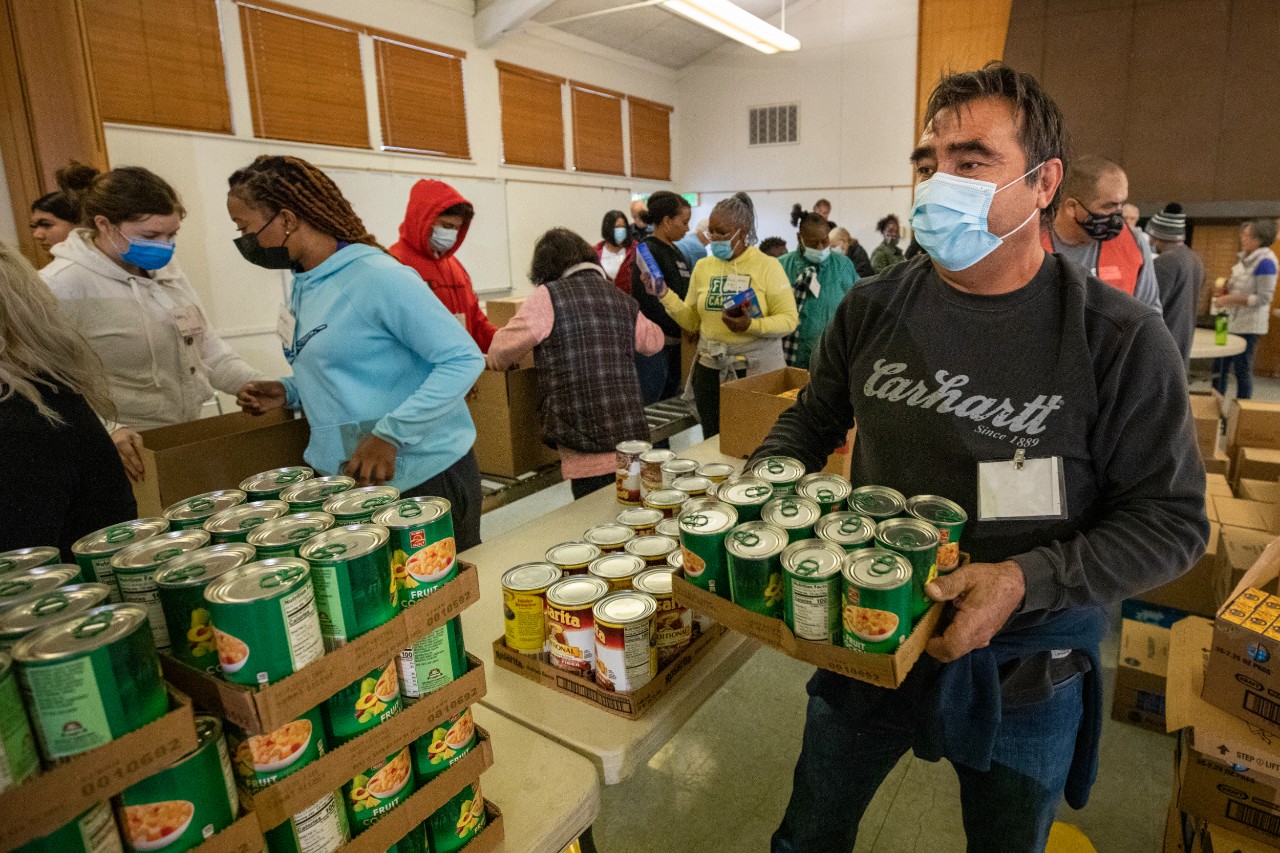 A church volunteer restocks fruit cocktail to keep the Boxes of Love® assembly line in motion.

“You don’t know how timely this is and how much this money is going to impact us,” Rossana told the staff.

"The little church that could"

Richard Garcia, one of Inner City's co-directors, notes how Agape Church increased its community involvement during COVID-19's devastation. Although Sunday attendance dropped from more than 115 people to fewer than 60 individuals, the church still feeds hundreds of people locally. It even sends money to feed 45 families in two different cities in Mexico. According to Richard, this is "the little church that could." 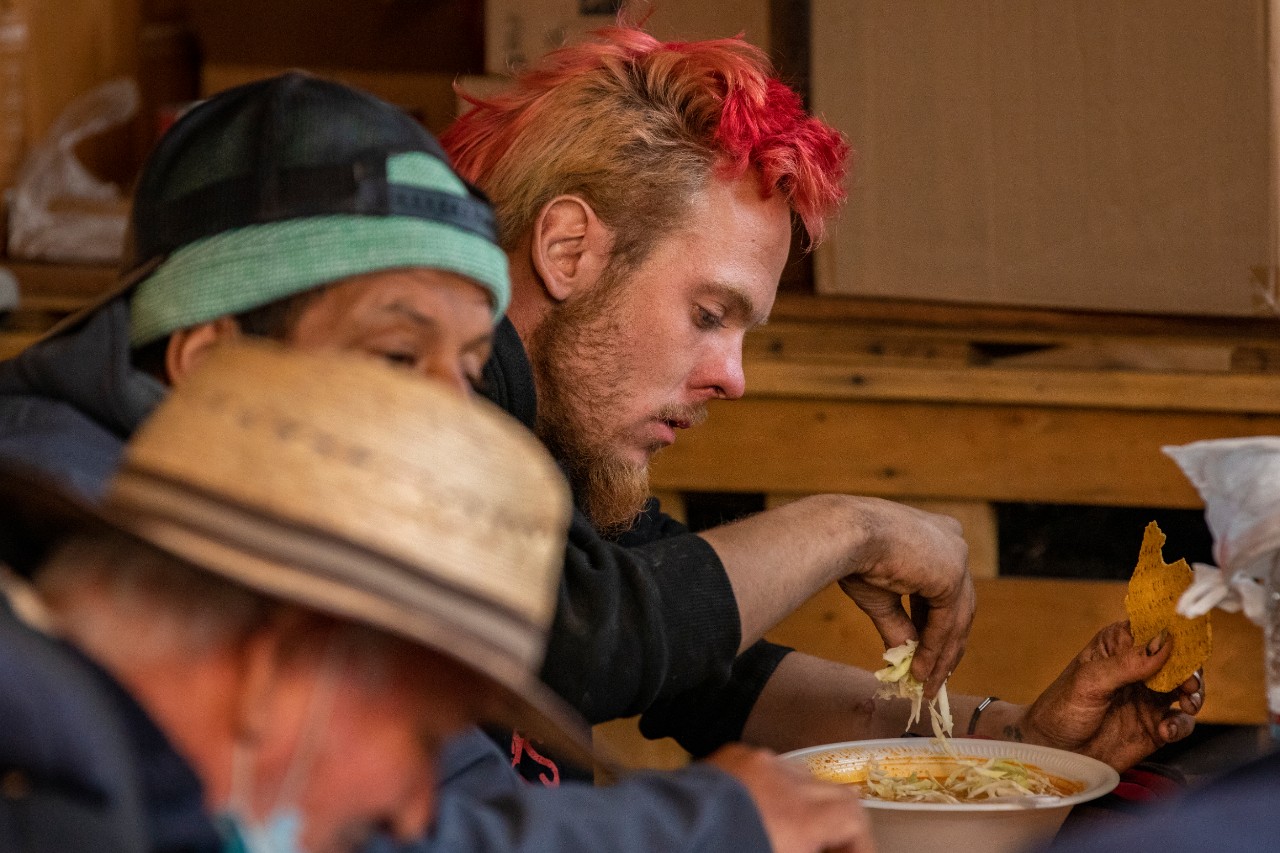 Homeless men from a nearby street mission eat a free lunch of hominy soup with shredded cabbage and tortillas during the Boxes of Love® distribution at Agape Church.

“Rossana and Jose and their two older daughters are truly amazing, with such servant’s hearts and love for people and God,” Richard says. “They’re unique in that what some people would look at as obstacles, they look at and say, ‘You know what, we’ll make this work, because we need for it to work. We have too many people that are dependent on this ministry.’” 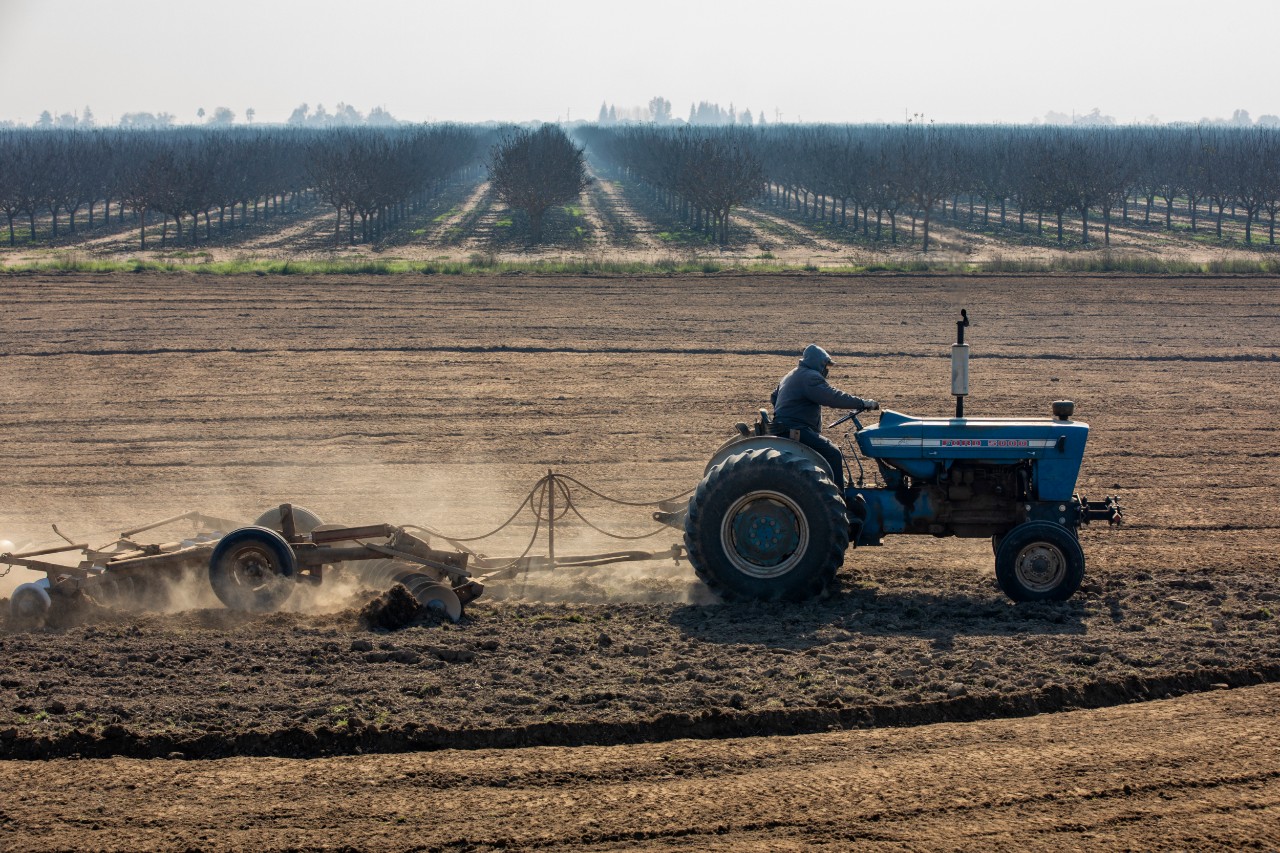 Because the past year has been Kern County’s driest in 128 years, with zero water coming from the state water board, many farms gave up on planting crops in 2022.

God wants to use you to do great things just like he's using Rossana, Carlos, Jose and Blanca. How can you step forward in faith with God this week to make an impact on your community? 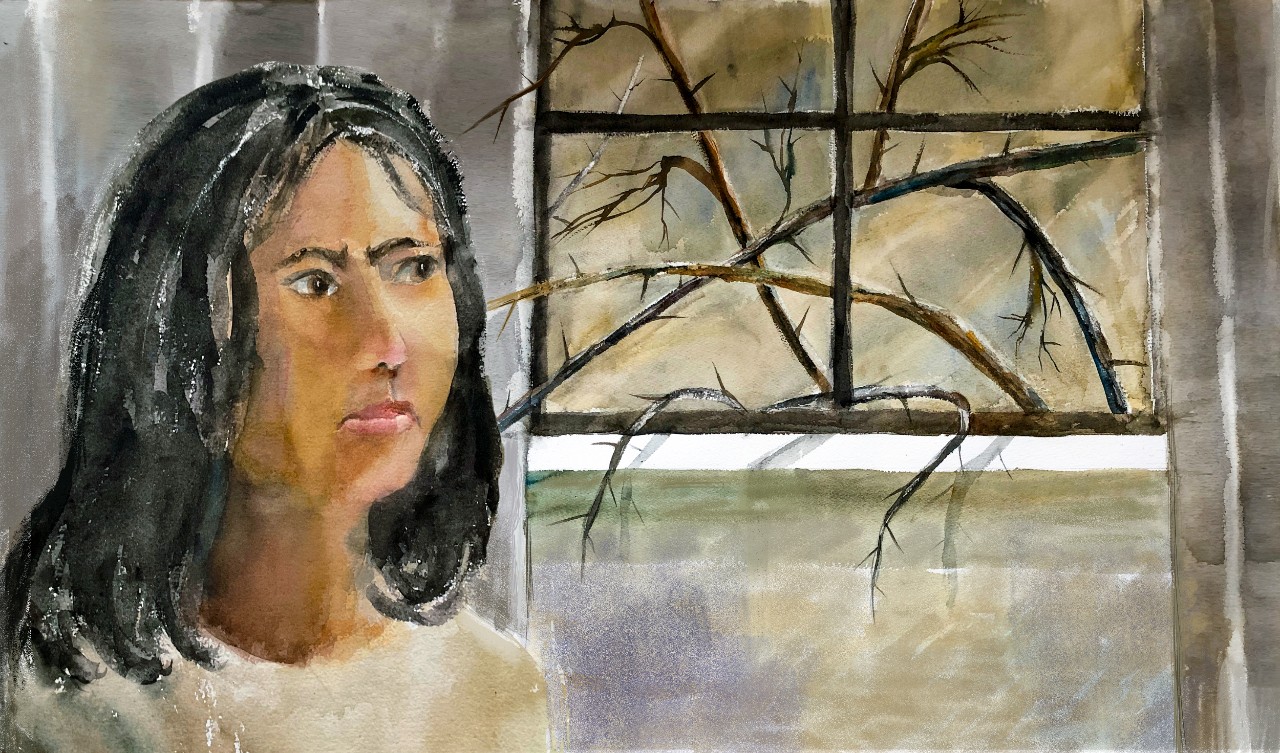 How Mental Illness Drew Me Closer to the Heart of God

When the pandemic hit New York City in 2020, Marilette Sanchez experienced a jarring mental health crisis. Now she candidly shares her story of chaos and God’s faithfulness through it all, in hopes of encouraging fellow sufferers and those whose loved ones struggle with mental health. 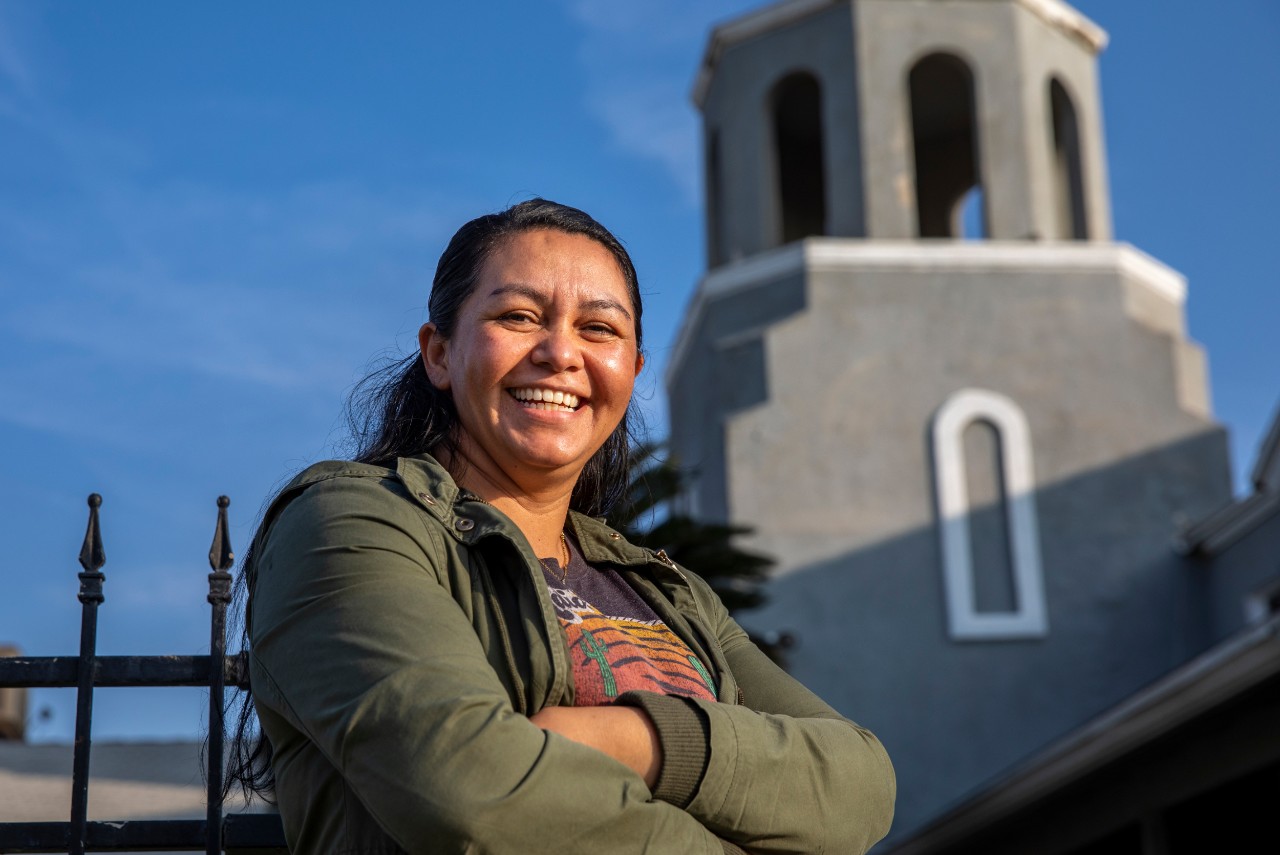 The Little Church That Could

Subscribe now to receive Cru Storylines® in your inbox.